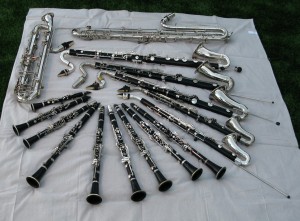 Meet the clarinets that Clarinet Fusion incorporates in their performances.

Pictures and descriptions below.

When talking about “the clarinet” you generally mean the Bb (soprano) Clarinet.  It is one of the younger woodwind instruments, having been invented around 1700.  A German instrument maker developed it based on a very simple shepherd’s instrument, known as the chalumeau.  Today we still call the lovely low register the “chalumeau”.  All clarinets have a bore which is basically the same diameter along the body of the instrument.  This cylindrical bore differs from the saxophone’s conical bore and gives the clarinet its characteristic tone. Vivaldi and Handel were the first of the great composers to write music for the clarinet, but Romantic Era composers like Carl Maria von Weber, Schumann, and Brahms were the ones who really showed the full potential of the clarinet as a solo instrument.  It wasn’t until the start of this Romantic period, that the reed was turned around to be played with the bottom lip.  Prior to 1820, the reed went on the top lip.  Both in sound and playing techniques the clarinet is one of the most flexible of all instruments.  It is the instrument most like the human voice.  You can also play virtually all forms of articulation with a clarinet – which is one reason why the clarinet is often substituted for violins in band arrangements of orchestral works.  A typical Bb soprano clarinet is 26 inches long.

The Eb Clarinet is the smallest of the standard clarinets and is only 19 inches long.  Although the Eb is somewhat of a rarity in middle and high school bands, it is a staple instrument in college and other wind ensembles.  The Eb sounds very bright – almost as bright as the piccolo flute.  Originally created to replace the high trumpet, it was used in concert and military bands towards the end of the eighteenth century.  The famous orchestral solo in Berlioz’s symphony fantastic was written in 1830.

The smallest clarinet is the Ab Piccolo Clarinet checking in at 14 inches long.  It is called the Ab sopranino and is the only surviving member of the piccolo group.  It’s not quite an octave higher than the Bb, but is the highest pitched clarinet produced.  Clarinets pitched in Ab are very rare outside of European wind bands, more used in Spain and Italy.  They are called for in the pit orchestra for several operas by Verdi, and used in Austrian military bands as it is often found in Viennese folk music.

The Eb Alto Clarinet, at 43 inches long, is said to be the modern form of the bassett horn.  They first appeared around 1770.  You find alto clarinets in wind or symphonic bands, but rarely in classical symphony orchestras, especially in light of Adolphe Sax’s technical improvements to the bass clarinet.  Although Berlioz said about the alto clarinet, “it is a very beautiful instrument which ought to take its place in all well established orchestras”, he never wrote music for it.  Many outstanding composers of the band repertoire, such as Grainger, Dello Joio, Copland, etc., have written significant parts for the alto clarinet.

The Bb Bass Clarinet competed for development beginning in the mid 1700s, some 60 years after the “clarinet”.  A wind instrument of this size, 4.5 feet long, requires a perfect key system.  It was not until the 1830s, about 10 years before the invention that bears his name, that Adolphe Sax developed a bass clarinet with significant acoustical improvements that became the basis for all bass clarinet design since.  (The first saxophone was invented in 1846.)  The bass clarinet’s tone range is wider than any other wind instrument.  With the addition of a few keys, it can play as low as a bassoon and as high up as a soprano clarinet.

EEb Contra Alto Clarinet development began in the first half of the nineteenth century; these were usually pitched in F and were called contra basset horns, being an octave lower than the basset horn.  Today’s EEb contra alto clarinet sounds an octave below the Eb alto, and 2 octaves below the Eb clarinet.  It is used mostly in concert bands and clarinet choirs where it usually, but not always, plays the bass line of a piece of music.  At 7 feet long, it is the second- largest member of the clarinet family in regular use, larger than the more common bass clarinet but not as large as the BBb contra bass clarinet.  Both the EEb contra alto and BBb contra bass clarinets are built in two configurations: a “straight” clarinet style, looking much like a longer version of the bass clarinet (made of wood and metal; or all metal); and an all metal version known as a “paperclip” due to its folded shape.

The BBb Contra Bass Clarinet is the largest of all clarinets in regular use – about 9 feet in length – and not very common. Composers usually only use this instrument for special effects. It’s extremely deep tone is comparable to that of a string bass, and it often plays that part in orchestral transcriptions.  It is one octave lower than the bass clarinet, 2 octaves lower than the “regular” clarinet, and almost 3 octaves lower than the Ab piccolo clarinet. 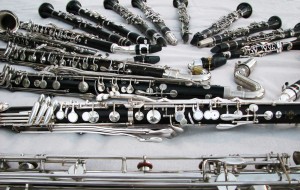